Sitting on a dried wood at hilltop above Kuensel Phodrang, I was looking at the spectacle wondrous and awe-inspiring Thimphu City. Thimphu City was picture perfect in the evening from that bird-eye view to sit and watch. In a glance I viewed whole city and I felt like I had grasped the instant glorious beauty and happiness of the world. 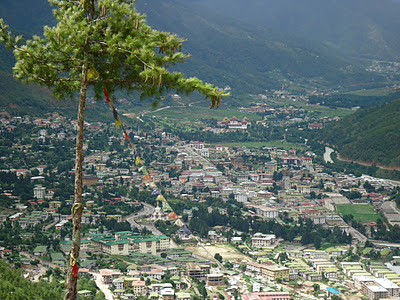 Unlike before; however, this evening the splendor of the City nabbed my heart, but only for a flashing moment. The City aroused a very strange considerate understanding in me.

I was on the same spot, a couple of months ago, but with my friends. Then, we were snacking and drinking wine and also were implicated listening to latest songs played from the cell phones. We admired looking at the majestic Thimphu City adorned with limitless lights, colorful buildings, bridges and moving vehicles. What a stunning city!

However, this evening like a disgruntled angel irked by fraudulent nature of humans, I stood grumbling at hilltop oblivious to magnificent beauty of the City. It was a strange wakefulness for me, though. I felt as if I were waking up from an enchanted slumber. The City in front of my eyes appeared a bit unreasonable-bewildering, even enigmatic.

Since early 1980s, Thimphu has been maneuvering towards ambitious target of urbanization and powerful development. It cleansed itself from the shabby jungles and forests. It chased away or ravaged those hostile wild animals from its territory. Now there’s no seeing of poisonous snakes, vampiric leeches and beers, no existence of monstrous tigers and lions, and rampaging elephants.

The City is now wholly inhibited by the superior and civilized beings called human beings. 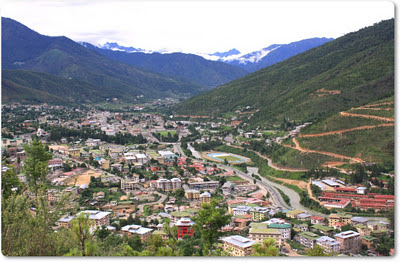 A casual notorious thought did spark over my mind. How many of the superior beings in that City would be making love at present? Ha-ha! This came to my mind uncontrollably. Pardon me!

I scanned the City-from north Trashichoedzong to south Babesa. Mostly educated and rich Bhutanese live with most sophisticated living standard here. Yet the City appeared to me a mere jungle. Urban Jungle, my conscience named the City. In this Urban Jungle people have tiger face.

Tigers and lions kill and eat their preys; human beings here diabolically stamp on each other to climb up social ladder or in want of more wealth and fame. We don’t have leeches or vampire that suck blood, but even close friends, relatives or lovers inexorably attack to suck one another’s blood. More horrific, as they are in a human face and hungrily suck blood to their fill (for their pleasure and advantage). Their hostile attitude stinks.

Venomous snakes in Thimphu Street are unseen yet many city dwellers or inhabitants (especially frustrated youth) conjure a poisonous threat as the deadly snakes. You don’t have to provoke them. They hiss at you and bite you brutally for no reason. Even the senior civil servants in volcanic anger are more scornful and threatening as a toxic snake.

Wild beers, though unnoticed, appeared in the street but in human face. Those misogynistic unruly men can molest or rape if found women walking alone late night in the street. Also, the City stopped orthodoxy beliefs in witch craft. But here many beautiful women live who are often deadlier than the witches we heard in the stories back in villages. These gorgeous women cast a spell and hex men using their sorcery of hypnotizing beauty. She sucks blood, eats his peace and robbed properties and ruins all his life.

There isn’t any jumbo elephant rampaging your homes and crops, but enough are those people who sabotage and raid others’ homes and properties.
Alas! Humans have become more callous and heartless than most beastly wild animals. Cognizant of all this, my heart sunk with rage, desolation and apathy. A forlorn hope of returning to the City where I live that I decided to live with starry and cloudless night at hilltop. Crickets swirled around me, birds returning to their resting place, chirped from the bushes and trees nearby.

Tears welled in my eyes, I screamed at the Thimphu City, “I will not return to you. Never! You have accumulated and favored the most hypocrite living beings. They are worst than most hostile wild animals. They are insane. I love to stay here in the company of the wild.”

Special thanks to Sonam Dendup, Legal Officer, Thimphu Dzongkhag Administration for his kind ideology and help in writing this article.
Posted by Riku at 12:39 PM