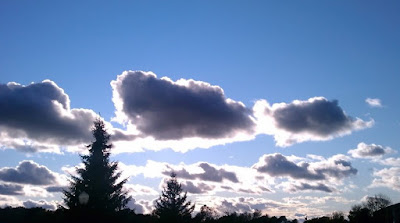 The movie is quirky, humorous, and very moving. As the film moved slowly, spectacularly, across the terrain of one beautiful scene to another, after sometime, I found myself so engrossed. I got so involved with the characters and with what’s happening on the screen. I became happy and sad with the hero. When the hero dances, I danced with him (with his angelic heroine). When he meets accident and hurts his limbs, I too felt his pain. When he’s heartbroken, I also underwent depression. My five senses were so attached to what’s happening on the screen. And I felt everything was real. I think this is true for all.

After the show, I broke singly from the crowd and marched towards home. And I followed a route, less noisy. As I walked, I apprehended that our life is like a movie show. This understanding overwhelmed me! Like watching a movie, we too think that the world around us is real. Actually, a world around us is created based on our interpretation of what we see, hear, and perceive through our five senses. Everything looks real though.

I agree with the eastern ideology-it’s our mind and thoughts that create the world. The world we experience and the life we live are the reflections of our thoughts. These thoughts make us expect, behave, talk and act in a certain personalized way. They shape our circumstances and relationships. But we can change our thoughts like we change the cassette to watch another movie. By changing our thoughts, we can change the illusion and experience a different reality.

At home-obviously a quieter, fewer distractions, stiller place-I could still my mind and the senses. It seemed that I could wake up completely, understood and became conscious of reality of world. There were no thoughts in my mind; my consciousness shifted into a new dimension. I became conscious of the world beyond the mind and illusions. And the world I knew and believed as real began to lose its reality.

It’s like when you’re watching a movie and suddenly you went out for the washroom. As you walk out, your attention will be withdrawn from the movie. And you get snapped out of the illusion the movie is creating and you are thrown into a different reality. However, the projecting machine keeps on projecting images on the screen. And you know that it’s the only light being projected through the film onto the screen. What is seen on the screen is not real, but yet it is there. It is same in our life, we call reality.

Even I could wake up from this illusion, it doesn’t mean I don’t see and experience the world around me. I live my life in the same manner as before, but fully awake. It’s like I’m watching the movie, but no longer interested in it. I dance no more with the hero; I cry no more with him. I’m fully disconnected, fully detached from the world around me. Rejection depresses me no more, failure hurts me no more or success delights me no more. I’m no more a slave to illusion. Now, every action in my daily life has been shaped in a better way (stronger, happier, practical and without worries).

Note: Thanks to Amrith for sharing this ideology to me; Remez.
Posted by Riku at 12:54 PM