A festival never to miss 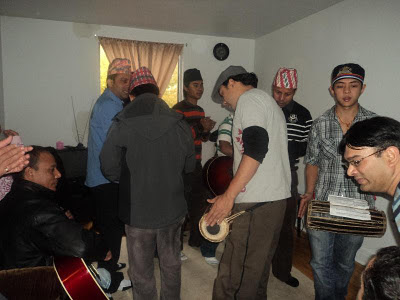 Pic: Deusi & Bhailo
If you really crave for the roti, I bring here for you the cel roti recipe. But before that, let me tell you briefly the significance of the festival. I will try making it short and yeah, very interesting. Mind you, I will not chant like pundits.
Forget about the history. Ram, Ravana, etc. etc. Myth will take its toll and it's going to deadly bore you. Diwali falls on one new moon night between mid-October and mid-November and is celebrated for five days. On the first day (Kaag tihar), crows are given offerings, considering them to be divine messengers. On the second day (Kukur tihar), dogs are given food for their honesty. Don't worry, all animals won't come. On the third day, Laxmi puja is performed; the day businessmen clear their accounts and worship Laxmi, the goddess of wealth. The fourth day is celebrated as New Year where Deusi and other cultural processions are observed. On the fifth and final day called "Bhai Tika", when brothers and sisters meet and exchange gifts. Interesting, na? 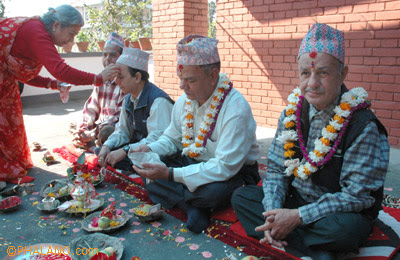 Pic: Bhai Tika (Brothers & sisters exchange gifts)
During Diwali, lights illuminate every corner of Hindu lands and the scent of incense sticks hangs in the air, mingled with the sounds of fire-crackers, joy, togetherness and hope. People in the community play "Deusi and Bhailo" which is a kind of singing and dancing forming a group. The groups go to all the houses in the community and play songs and dance, and give blessing to the visited houses, whereas the house owners offer foods like rice grains, cel roti, fruits and money. After the festival, they donate some amount of the collected money and food for charity and with rest of the money and food, they go for picnic. 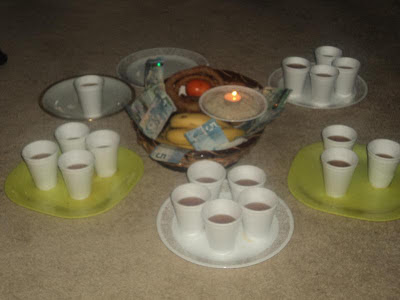 Dan (Money, roti, drinks, fruits) after Deusi & Bhailo
Remind me, if I have bored you. Ok, I have a trick here to trigger you active. Recollect those days you went out with your lhotsham friends playing “Deusi and Bhailo” or imagine that you’re young and had already formed a group and going around playing Deusi snacking on cel roti non-stop.
With each Diwali and the lights that illuminate homes and hearts, its significance is "the awareness of the inner light". The light empowers us to commit ourselves to good deeds which bring us closer to divinity. Hindu philosophy asserts that there’s something beyond the physical body and mind which is pure, infinite, and eternal. It refers to the light of higher knowledge that dispels all ignorance. With this awakening comes compassion and the awareness of the oneness of all things. 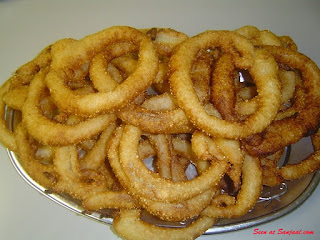 Now I will get your hands into the cooking of cel roti. Trust me, I asked this recipe from my sister who makes best cel roti among my family members.
Ingredients:

25 gm suji, ½ kg besan (optional), ½ kg maida, ½ kg rice flour, 200 g sugar, 5 pieces of crushed elaichi, ¼ teaspoon of baking soda, and 1 liter refined vegetable oil.
Recipe:
Step 1: Mix all the ingredients in a bowel, except refined veg. oil.
Step 2: Add half liter of warm water in the bowl and stir it with your hands for 20 minutes until it becomes smooth and thick liquid.
Step 3: Heat the vegetable oil at 100 degree Celsius in a pan.
Step 4: With the help of your one hand, grasp a half handful of the liquid ingredients and pour it in the pan clockwise or anti-clockwise until one end touches other end.
Step 5: Take it out immediately with the help of a two feet long bamboo stick when it turns dark red.
Cel roti is eaten with chutney, aludam and even with non-veg. curries.
Symbolism: Since this roti is prepared during Diwali, a time when all family members come together, the round-shaped cel roti symbolizes that wherever the members of a family go or settle down (though very far away), they would be never forgotten and ultimately come together back to their village, their root, during the festivals or in times of need or adversity.