An idea or feeling, so strange, extraordinary hovers over my mind. Sprayed so freshly, so colorfully that I want to grasp it, not letting it go away. Desiring to keep it me forever, that I long to pen it down right away and immortalize it.

I run-round my room in extreme ecstasy. Jump to my room enthusiastically, seated in front of my PC all smiles, try hard to submit my feelings-recollect, catch and pour down each word.

However, one fear remains in my tender heart-that each second may steal away the words from me.

And consequently the words lost, the feelings go dry and the whole idea disappears into thin air- the feelings so strong, the idea so distinctive and extraordinary leaves me unsowed in my heart and PC.

Frustrated, I turn around, kick the furniture and punch on the walls. A bottle of arra in my bedroom's corner remains so inviting. I take a sip, then two and a whole bottle-drink it as if for my lost-love.

Drunk ruthlessly with local arra and undeniably in utmost exasperation, again I try my nerve to recollect those words, reframe it in my mind and try submitting in my PC. The arra; however, disappointingly ate up the few words lingering in my head.

Depression ensnared me so badly and I panicked helplessly. No come back of the lost idea, it left me forever.

I cried in remorse. I couldn’t grasp and own the most remarkable idea or a feeling. I just let it go away.

A week or two later, I will be reading my friends’ blogs. Suddenly I come across my idea posted: written exactly how I had felt a week ago. He expresses the feelings in best words that I had just dreamed.

And how I envy the writer, though?

I tried to gain back the article, snatch it from the writer and own it. But I am helpless again as it was already owned by another person.

More and dangerous depression engulfed me; this time with enraged jealousy and inferiority.

Shall I take another bottle of arra?
Posted by Riku at 1:29 PM 1 comment:

Three years back in 2008, I visited Meme Lethro (the eldest Bhutanese citizen) in Jigmechoeling, Sarpang. Since he has witnessed the world from a century ago and has seen all the Druk Gyalpos and also lived their sovereign reigns, I felt I should write and mark his memoirs. 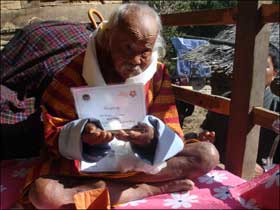 Today, Meme Lethro is 111 year-old. He was recognized and entitled as the Centenary Citizen in 2008 and has received certificate and supports from His Majesty the King.

Mme Lethro lives one-km downhill from the Jigmechoeling’s Gup office. Today there are more than 1,000 households in the valley. All kinds of modern facilities and infrastructures have made their way here (grade-I BHU, mobile network, motor road, farm mechanization, dzong and dratshang).

After crossing numerous rice fields and orange orchards, I reached a cottage built from wooden planks and CGI roof. On its veranda, I spotted Meme Lethro. He was weaving bamboo hat. Hunch-back and toothless, he is pale and wrinkly. He sipped a cup of tea as he wove a hat.

Tandin Wangdi, his 29-year old maternal grandson, looks after the old Meme. Tandin told me, “Meme always wakes up early and loves to have tea. Then, straightaway, he resumes back to his daily chores of weaving bamboo hats and basket,” he said.

I was curious; perhaps I wanted to find out the secret to his longevity. I inquired about his diet. Tandin said that Meme can still chew and relishes rice for lunch and dinner, which has been hi staple diet.

As I sat there watched the centennial man, I couldn't help but see images in my head of everything this man was witness to.

I asked him about Bhutan’s past which stretched back to the late nineteen century. He said the memories are fading, though he remembers his father dying when he was a 15 year-old. Then he lived as a shifting cultivator and as a cowherd in the Kheng valley of Berti. He had never been to school as there were no school in the country except in Bumthang and in Paro.

When he was young, Jigmechoeling and all other parts of Sarpang and Zhemgang were covered with thick forest and wild animals. He said that only four households inhabited the whole valley of Chungshing under Zhemgang and Jigmechoeling.

As a teenager, Lethro had to deliver annual taxes to Lamigoenpa at Jakar with his other three neighbors from Chungshing. The tax imposed upon them was large-size bamboo carpets. Each household had to deliver a carpet each.

“We had to spend four nights to reach Lamigoenpa. The route was very rough and slippery covered with leeches, beers, wild boars, and heavy snowfall,” he recalled slowly.

“I still vividly remember that there were only two huts in Gelephu when I was young boy. Those two huts served as tongba shops for the traders between Bhutan and Assam,” he said. "The Bhutanese bought garments and other necessities like salt and oil from Bongaigoan, Assam."

Meme Lethro said proudly that there was no cardamom and orange plants at that time. “Later on with my grand father, I cultivated orange and cardamom plants all over the valleys of Sarpang and other parts of southern Bhutan.”

Later on, Lethro worked, as woolah, at the construction of the Thimphu-Phuentsholing National Highway for a month. He also contributed his service in the reconstruction of Tashichoedzong in Thimphu for more than three months.

He said Thimphu was a shed. “The capital was covered with thick jungles and wild animals,” he added.

Besides being recognized as the Centenary Citizen of Bhutan in 2008, in his thirties, Meme Lethro was recognized and awarded a Nu 5 Silver Coin Medal by the second Druk Gyalpo for his contributions. At the time he was the man-in-charge for the new settlement at Jigmechoeling valley for nine years, after Lhotsampas immigrated to the valley.

For Meme Lethro, marriage came late, when he was 66. He married Mudhu, a girl from Chungshing who was 20 years younger to him. But after 20 years she died leaving behind no children. Meme is the last survivor from his family of seven siblings.

The secret to his longevity, he said was his,, “faith in Kencho Sum, the peaceful reigns of all the monarchs, and my healthy diet." He said he hardly touched alcohol although it was very much prevalent in Kheng culture.

"I still feel very good," he said. "The centenary medal has inspired me. I hope I can live a little longer to see the sunrises and the sunsets." With that, he went back to weaving his hat and the refilled tea.
Posted by Riku at 12:55 PM 3 comments:

For many of us, the New Year is a time of new beginnings, of resolutions, of fresh starts (setting audacious intentions and priorities for the year ahead). For some, it is also a time for reflection on the events and choices of the past year.

Many have feasted the New Year with wild celebration; however, I typically spent New Year Eve in secluded meditation. I have, thus, pondered on priorities for the New Year, 2011. And this year’s resolution, I committed to follow a simple moral code of Respect.

Respect to me is a simple act of giving particular attention or a special regard, taken together or taken care of, respect for self, others, and the whole planet.

I will give high regard and attention to myself. This means I will take good care of myself, dragging myself on a virtuous path. I will take good foods only (avoiding drugs, alcohols, cigarettes, bad friends). I will give myself timely sleep and daily exercise which can help reduce my stress and sickness.

Giving high regard and attention to other people, I will be respecting them and not having anger, greed, or hatred toward them. It means I can foster happiness to my relatives or friends or co-workers or beloved ones and all other people. I will only tell truth, be honest. I will never harm them or gossip maliciously about them. I will also never exploit the weaker sex (women), youth, elder citizens, physically challenged people and the poor. Instead I will reach out and help them.

Since culture is very important for any independent nation like Bhutan, I will give high regard to my religion, national dress, language or local dialects, custom and tradition, ritual and take care of them from their dilution, destruction and negligence.

I will keep our country’s national interest above anything to protect and keep our country sovereign and independent. I will also respect our great forefathers and all the Kings for their insurmountable sacrifices and hard works and bestowing us with sovereignty, prosperity and peace.

Lastly I will usher my highest regard and attention for the planet and its inhabitants. I will join the fight against reducing our human consumption and refilling diminishing resources from the earth. I will encourage stopping deforestation, exploiting mining and menacing urbanization. I will also stop eating meat or killing animals, and wearing animal-produced garments. I will rather initiate practicing green-gardening and consuming local products and help earth grow sustainably by planting more green trees and avoiding environmentally hazardous practices.