I’ve thought long where to begin this letter. For it’s very difficult to put my thoughts into words here. Still though, I ought to write this chit to you... coz I think I ought to, coz it’s so very urgent.

So I bring to you this message from your homeland, i.e. your dear dzongkhag is sick. In fact, the place of your heart, your home has been suffering silently, feebly for the past three decades.

A cancer called mining has afflicted her, wounding and bruising most parts of her body. It’s gobbling her flesh, ruthlessly ripping the body apart. Her flesh and blood was being sucked out, far away in those jumbo trucks. Her entire body was undergoing very intense pain, trembling.

When I first saw her, I couldn’t believe it. For, I’d never laid my eyes at such painful scenes before. Instantaneously, a deep chill ran down my throat and I almost burst into tears.

Arriving at Pemagatshel, I felt like I’d landed not in Bhutan, at all. I felt I’d entered somewhere else, where the development policy was not GNH but greed and materialism - where the government ventures into evil mining projects even at the cost of ruining environment and its citizens’ health.

The monstrous machines would work at the wounded sites, producing eerie and frightening sound. Even the ride to Pemagatshel was very unpleasant, as the road was in a wretched condition, apparently injured by gypsum trucks.

Hey Pemagatshelpas, how could you despise her when she was in such a miserable state? How could you settle in other parts of the world when your dzongkhag is sick and crying out for immediate treatment? How could you migrate to somewhere with an excuse to escape the hostile and aggressive environment?

When I heard there are so many of you - highly qualified, powerful and rich persons in the civil service, corporations, NGOs, INGOs and private sector - it started to bother me in a strange new way. And I became angry. This time not angry at the cancer called mining, but at you. Huh!

What’s the use of your education, high positions and wealth if you don’t bother to help and treat your own rightful birthplace and fellow-villagers? Can you really serve the Tsa-Wa-Sum when you do not heed to protecting your birthplace?

I know that you work dutifully for yourself and your family. But you know what? Our responsibility is more than that, and that’s called natural responsibility, as has been always reiterated by our beloved Kings.

Or, are you scared of speaking up against those big mining companies? Why should you be? Coz Pemagatshel is your birthplace, and you should love your birthplace unashamedly. Come what may, it’s birthright to protect it.

By avoiding and remaining silent, you’re only supporting the cruelty and injustice. The truth is that the Blissful Land of the Lotus is suffering not coz of the mining, but from cruel deafness (from you).

I must explain to you, the mining has brought more harms than serving it purpose of utilizing the reserve for economic development of your dzongkhag and optimization of revenue to the government. The mining’s incessant noise, dust, running trucks and uproarious machines have mired the health and living condition of innocent local peasants, your own fellow-villagers.

Their only source of livelihood, crops and vegetables, was affected. Suffocated by the dust and loud noise, everyday they experience unlikely prickly bitter hot weather. The lush green environment was degrading, irreparably.

Well, statistics don’t lie! The mining sector’s contribution to the nation’s economy is at a mere two percent. Pemagatshel received mining activity since 1983, but quite ironically, your dzongkhag still has second highest level of poverty. Only a handful of individuals have been benefited.

Your dzongkhag longs for your embrace and hug. She needs immediate nursing and treatment from you. After all, only you can nurse her, protect her.

Dear Pemagatshelpas, there’s no task too difficult, no distance too far. It’s only matter of priority and how much you care for your root. If you want to be real happy and proud, you have to go back, to be feeling, to be facing.

You should unite together and raise your voice against the mining or ask the government to end such cancerous mining operation in your dzongkhag. Break the silence and make all the appropriate noises - loud and with conviction. The Blissful Land of the Lotus will still be a better place.

P.S. You cannot serve the country if you cannot be loyal to your root.

Sharing his life through arts

With the support from the Department of Information and Media, MoIC, Artist Dorji Gyeltshen put up an exhibition of his arts for 10 days (April 25-May 5). In fact, it’s one of the best non-existing contemporary art exhibitions I had ever attended. 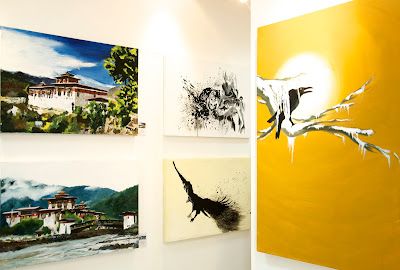 Very vibrant and colourful, the arts were so deeply rich and enthralling. Dorji’s acrylic and watercolour paintings are diverse and connect very well into the concepts of Buddhism, our landscapes and nature, and time. 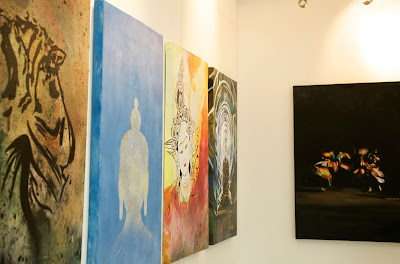 Arts can not only bring aesthetic pleasure to our life and enrich our cultural heritage, but they contribute to the quality of life and wellbeing. That’s what I learned from Dorji’s arts. 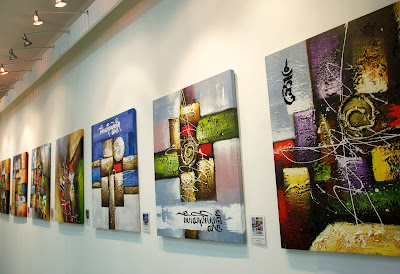 Dorji Gyeltshen, 32, is one of the founding members of VAST Bhutan in 1998. Asha Karma, Founder of VAST Bhutan, has tutored him. He had also conducted Solo Art Exhibition in Singapore and Sherubtse College in the past.

On the art exhibition booklet, the artist wrote, “My artistic expression is a way for me to share my life and my vulnerabilities with others.”
“I live through joy and sorrow, courage and fear, strength and weakness, love, pain, life and death. These are fundamental values that characterize all human existence, and….these human experiences are the subject I like to share with the world,” he stated. 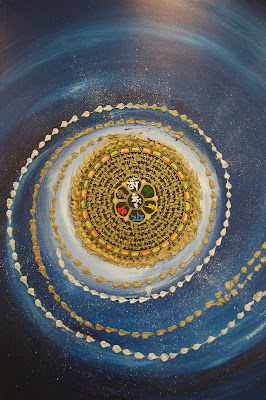