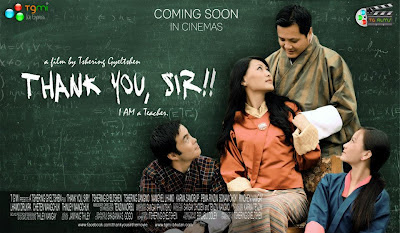 This film is different and superhit. Thank you, Sir!! a film by Tshering Gyeltshen, shot in the beautiful valley of Trashiyangtse with Bayling HSS as the grand central setting, is a real cinematic treat for you. It’s a film that you take home, and reminisce and relish for days, or even weeks.  Believe me.

Its genre, drama, the film is for all: young or old. Its storyline, acting, music and cinematography are exceptionally good, very professionally crafted and executed. You won’t grumble, frankly speaking, after coming out of cinema hall.

Most shockingly, Thank you, Sir!! is the most expensive local production ever with a direct cost of Nu 9.5 million. A total of 750 cast and crew, the largest so far in a local film, this film is shot over a period of seven months (Oct 2011 to May 2012). The director of photography was hired from India. 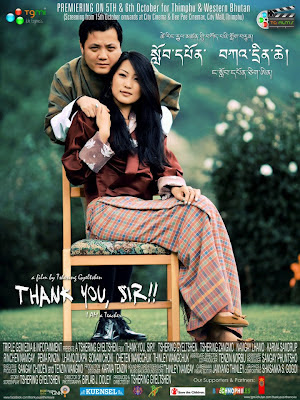 Let me tell you Thank you, Sir!!, an educational/social movie, is all about a passionate teacher Jigmed Lodhen (Tshering Gyeltshen) who believes that a teacher dedicated to his/her calling can change the world. After his graduation, Jigmed Lodhen arrives at Mendrupling HSS (Bayling HSS) like a breath of fresh air. He is extraordinarily filled with passion and an earnest zeal for his life's calling - TEACHING. He believes and is prepared and determined to prove that teachers dedicated to their calling and passionate about their work will make all the difference...or the critical difference.

As Jigmed's life unravels in Mendrupling in the course of five years we come across a beautiful and sincere geography teacher of the school, Mendrel Yutsho (Tshering Zangmo) who has crush on Jigmed. We also come across the principal Ngelhey Dorji (Thinley Wangchuk) and "SIR" Naalha Tashi (Cheten Wangchuk) who play the roles of deadly villains. They are portrayed mostly in satirical and comical scenes, but you will love their roles, especially Cheten’s. Along with him, Cheten makes you scared, thrilled, cried, and laughed. 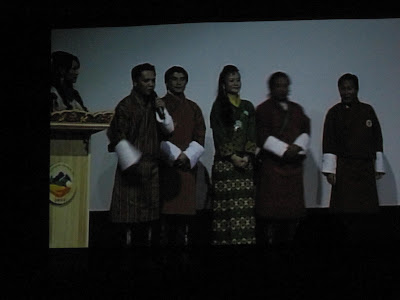 Pic: During the premiere show

In the supporting roles, Lhaksam Longdroel (Karma Samdrup) and Lekzeen Reengsel (Namgyel Lhamo) play very important roles as students. These two characters gave very powerful performance, and I am confident that they will bag home an award each.

Many social issues have been reflected in the film: a teacher-student affair, women who gamble with their husbands’ hard-earned money, people with vanity/accented English and a rumour-monger society. This film is very bold. The Dzongda of the dzongkhag illicitly keeps an affair with a school student. One time, with his friends and officials, the dzongkda comes to the school, drunk, and teases girls in the school basketball court. This, in fact, (what I feel) represents a true story of the Samtse College of Education where the dzongda and a few officials involved in similar case at the college.

However, Thank you, Sir!! has an unexpected climax that you will land up choking, all tearful. Go and watch it at City Cinema, you will love it. An outstanding film ever made by a Bhutanese!