Like you, I was also awestricken with the way the Bhutanese football team performed and won from our first World Cup qualifying match against Sri Lanka. In fact, hardly anyone had expected a victory. To be honest, I was simply praying that the team ranked rock bottom with FIFA, 209/209, would not concede as much goals as we lost 20-0 to Kuwait in 2000. 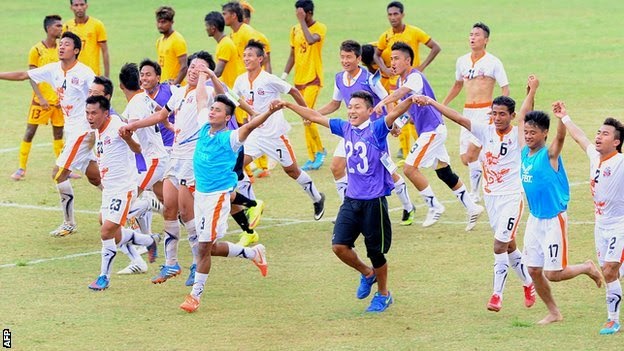 This time I was proved wrong, as all else.

But now, this particular moment, I am more awestruck with the way Bhutanese started showing respect, wishes and support for the national squad, football in Bhutan. This particular win brought the entire nation together; I can feel a sense of true patriotism and unity all over. On social media sites, streets, restaurants, discotheques and offices.
Goodness, it’s alarmingly heartening!

So as to add, some enterprises and business companies are already showering unbelievable accompaniments. Free live match screening, increase bandwidth of internet, free refreshment, and so on.

The local volunteers, athletes and individuals are working hard towards making the second leg an extraordinary experience this Tuesday at Changlimithang.

“Face paintings”, filling the stadium with “yellow and orange colour” shirts, banners, cheering on the home team players with drums, and most importantly, respecting the visiting team.

Even the mainstream media like TV and newspapers, which were almost silent, have now revved up their interest and the BBS2 will be broadcasting the game live. This is unbelievable!

If the dragon would ever make a noise, then this is it. If the dragon would ever show its true colour and blood, then this is it.
The tiny dragon nation has roared, finally; it made a thunderous noise never heard before. The dragon is just awake. And considering the noise, power, support and prayers, there is no denying that the Drukpa team would gulp its opponents and emerge victorious again in our own land. Moreover, there is no denying that our country would be playing in the World Cup sooner.

I pray, rather earnestly, that this already awoken thirsty dragon would not march back to sleep again. Instead, it would keep on roaring, gliding and overcome as much bigger opponents as it can on its long road to playing the World Cup.

And let the dragon roar even louder, quake the world.