Blind, but with a Vision

Amrith Bahadur Subba, 30-year old, a colleague of mine is visually impaired. He lost his eyesight to untreated red-eye epidemic that struck the vicinity when he was just nine.

Today he works as a counselor with Department of Youth and Sports, MoE in Thimphu. In addition to regular counseling, guidance and information services, he helps the management in administrative write-ups and organizing certain youth programmes. 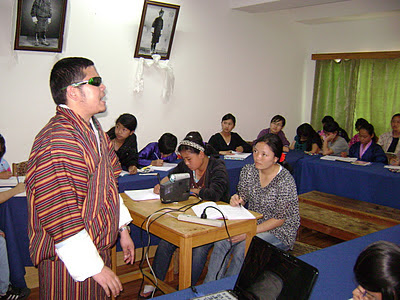 Many people wonder how he, a blind person, works in his office. Let me mention here, I am also amazed at the way he works. Very professional in dealing his clients, he is also effective in all administrative works. If you’re seeing him working in his office for the first time, he would make you impressively awestruck.

In the office, most of the time he spends in front of his computer. Advanced technology has made it possible for him to work on the computer with the help of a screen-reading software called JAWS (Job Access With Speech) which reads anything that appears on the screen. Yes, he too is on facebook, Yahoo! Messenger, Skype and he too blogs. He uses HP printer and scanner without anyone’s help. He prepares his own presentation slides and uses the projector in a very proficient style. He can walk to and fro from his office to washroom without any escort. A good vocalist, he is very much interested composing songs. To his name, he produced an audio album in 2005.

Happily married to a caring wife and fathered two children, when at home, mostly he spends his time cooking. I am enthralled each time I watch him chopping the vegetables and cooking it. And after half an hour or so, he readies delicious ema datshi, ezey and other Indian-style curries. He can even cook non-veg. Hey, trust me, this writer has tasted his foods many times. Awesome!

Unlike other careless Bhutanese men, he wears gho himself. That’s also very neatly.

To briefly account his achievements, Amrith is a gold medalist in BA English Literature from Bharatiyar University, Tamil Nadu. After he stood fourth in RCSC exams 2005, he did his PG in Public Administration for one year from Royal Institute of Management, Simtokha.

He was considered one of the independent and very successful disabled persons in our country; however, an inevitable challenge had never stopped him from becoming completely independent. He couldn’t walk alone once he was out of his house and office-he always needed a person to escort him.

Many of you who know Amrith might have seen him every morning and evening being escorted to his office and back to his house. The person who has been escorting him is me. For the last one year, I helped him escorting as his wife had to stay home to babysit their young children.

But a problem cropped up! There’s no one to escort him when I was away for tours, trainings or on leave. He became handicapped again!

It was in last April, a week-long Mobility Training for Disabled was conducted in Punakha. I encouraged him to participate in the training as it aimed to empower the disabled person through making them walk independently. Likewise, the training taught him the handling of the white cane (walking stick), finding shorelines of a road or footpath with the help of the cane, discovering landmarks (edge of a footpath) and how to walk on staircases.

However, even after the training he couldn’t walk alone as his house is half a mile away from the office. More difficult was that he has to cross two crowded traffics between Swimming Pool and Kelki School. But I had consistently encouraged him to make this audacious attempt. 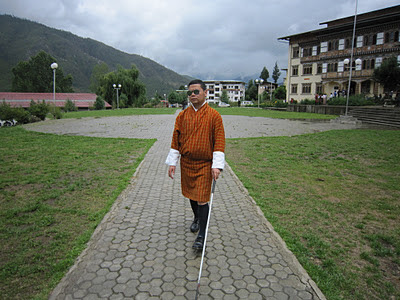 Encouragement only was not enough. Everyday I had to train him on the route between his house and office. I escorted him, but this time mentioning him about shorelines of the footpaths, roads, traffics and landmarks of all the gates, fences, playgrounds and buildings. He studied, sensed and felt with his cane. From the third day, I made him walk on this route, unescorted. I would be behind him watching him walk with his cane and shouting at him if he had missed or overstepped the shorelines or landmarks.

After one week of extensive training, I had to go for a fortnight-long training (resourced by NBCC, WHO) in Paro. One afternoon, when in Paro, I received a phone call from Amrith. It’s a good news, “Hey! I’ve become independent! Today I walked office alone. From now on, I can walk alone. Thank you, Rikku!”

As he was buoyed by his achievement, I also reveled in triumph and punched the air in celebration,